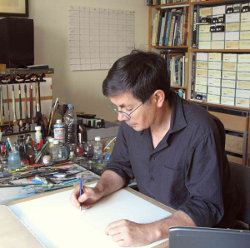 I consider that there is no equal to watercolours for bringing to life the effects of water, fluidity, transparency and the infinite complexity of wave movement. From microcosms to macrocosms, to capturing and rendering subtle lights, to subliming the aquatic world where man-made boats are reduced to simple interfaces between the water and the air, between man and nature.

With these precisely detailed watercolours, I endeavour to reproduce authenticity, precision and all the delicacy that maritime atmospheres encompass; I try to reveal "the soul" of the sea if that is possible, or to bring out the subtleties of the more gentle shades of the water and air of the River Loire.

Constantly in search of new horizons, I have created a series of « Thalassographics » which are a form of elementary paintings, where water, rock, light and maritime energy are transformed into a new form of marine abstracts.

Finally a friend will tell you about my marine photos:

Photographs or paintings? Each photo is a painting and each painting is a photo. Hervé Richard has been exploring harbours, ship yards and holds for over twenty years. His artist's eye captures every single detail of the traces sailors have left behind when trying out colours for the ships they were working on. Hervé transforms these traces to create original works: "Marine Abstractions" which are as impressive as they are improbable! 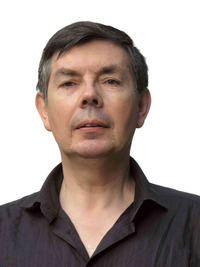 I was born in Tours in 1952 and having spent part of my childhood on the south coast of Brittany I have always had an attraction towards the sea.

An early passion for drawing and art developed under the influence of Pierre Vignac in the school of Fine Art at Tours led me for the first time to evolve a style between hyper-realism and representational abstraction.

Combining this with an excellent knowledge of the maritime world , many voyages and a developing style in watercolour, convinced me to leave teaching in 1987 to dedicate my life to depicting the sea in painting and photography.

I was awarded the Prix d'Excellence " Les Marines" 1988 and am a member of The European Institute of Watercolourists with many other awards and distinctions.

I have exhibited in France,Dublin,London and other European cities. I exhibit regularly in the galleries « Vue sur mer » in Dinard, « Sillage » in Sauzon, in Belle-île en mer, « Port en Dro » in Carnac, « Artespace » in Nantes, « Les Ateliers du possible » in Bécherel, « Vision d'Artiste" » in Lyon, « Le Triangle Blanc » in Le Croisic and « Colbert » in Tours.